Gordon: Before the rear lines could recover, my exultant men were on their feet, devouring them with successive volleys. (Murfin, The Gleam of Bayonets, 1965; photo M. Gentile)

For a unique perspective, see Antietam Ranger Mannie Gentile’s sequence of narration and photographs depicting the Sunken Road fighting in 55mm from his blog My Year of Living Rangerously.

Here is the proposition; let me know if you’re interested. You may reply through this venue or to my private email.

We’ll meet at 3:00 Saturday September 20, 2008 on the Maryland side of the Potomac at Boteler’s (Packhorse, Shepherdstown) Ford. This may entail some car-pooling from Antietam Visitor’s Center if there are a lot of us. 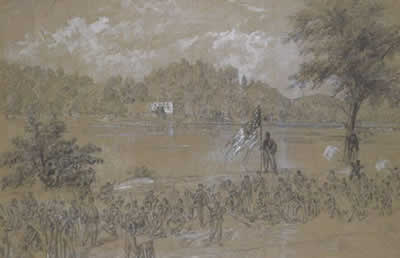 Ford near Shepherdstown, on the Potomac. Pickets firing across the river (A. Waud, Sept 1862, Library of Congress)

We’ll wade the Potomac at the ford site, and on the other side some folks from Shepherdstown Battlefield Preservation Association (SBPA) will meet us.

They will arrange for us to use the actual ford site, which is on private property, and we’ll stop and look at the ruins of the Cement Mill. Then we’ll ascend the bluff roughly along the route of Barnes’ Brigade and go to the place where the 118th PA fought, all of which is also on private property. After viewing the main battle area we’ll walk to the original farmhouse, also privately owned, where the opposing forces first met, and see a shell embedded in the farmhouse wall.

From there we’ll go to the Dunleavey’s home, just a short distance away, where they will serve us hamburgers, hot dogs and all the trimmings, as well as adult liquid refreshments that will slake the thirst of all dedicated battlefield trampers. When we have had our fill of everything, they will provide drivers to take us back to our vehicles, thus we only have to wade once.

All of this wonderful stuff for only a paltry $25 per person donation to SBPA, which is tax-deductible! It doesn’t get any better than this! Tramping a privately-owned battlefield, helping a preservation group, and a good meal!!
Any takers?

One of the most successful projects undertaken by SHAF was our marking of extant hospital sites used in the Maryland Campaign. Although we have not marked all of them, many private property owners have allowed us to place signs along the road that inform visitors of the location of the significant hospitals. Our first effort at this, undertaken in the late 1980’s was aided by the donation of the signs by the Baltimore Civil War Round Table. 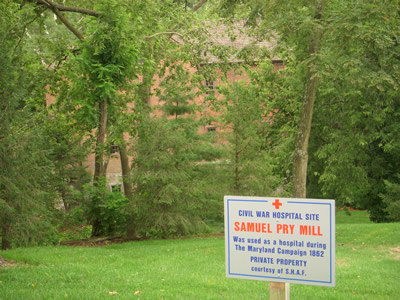 The importance of marking these sites is not only to educate the visitor, but also to raise local awareness of the importance of historical properties in the area. If neighbors and local citizens recognize that a house or barn has historical importance they are less likely advocate tearing them down. Awareness helps us save history. Sometimes it is that simple. We place these signs in cooperation with the property owner, at no cost to them. Most people are very enthusiastic supporters of this project and many positive comments have come in over the years. 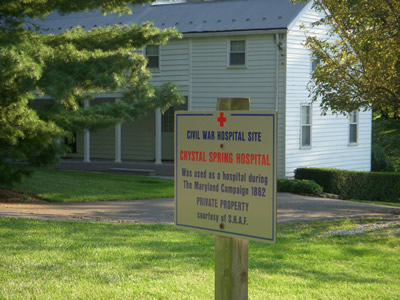 After almost 20 years, these signs are beginning to show their age, thus the replacement campaign. The old wooden signs are coming down to be replaced by new light-weight high impact plastic. We’ve begun with a half dozen signs in the Sharpsburg area, but others will be done in the next year. If any of our members are aware of one of our signs that needs replacing, please go to SHAF.org and let us know. Thank you.

By the Shepherdstown Battlefield Preservation Association
For Immediate Release [August 18, 2008]

The Shepherdstown Battlefield Preservation Association Inc (SBPA) announced that the proceeds from its 4th Annual Benefit Concert, scheduled for September 19 at the Shepherdstown Train Station, will be shared with the Ellsworth Family Fund as well as helping to fund its battlefield preservation efforts.

“Friday, Sept. 19 marks the 146th anniversary of the start of the 1862 Battle of Shepherdstown”, said Ed Dunleavy, President of SBPA, “and it is fitting that this year’s concert is on the same day of the week as the start of the battle in 1862. More importantly, the SBPA Board voted to share the concert’s net proceeds equally with the Ellsworth Family Fund”. Mason Ellsworth the 18 year-old son of Sylvia and Brian Ellsworth was critically injured in an auto accident in June and will need significant medical treatment. “While SBPA’s expenses continue to mount” said Dunleavy, “our Board thought it important to help a Shepherdstown family in its time of need”.

“The concert will feature many local performers”, said Mike Nickerson who chaired the Concert Committee, “Todd Coyle, Andrea and Dave Hines, Don Oehser, Eddy Barney, Dave Lafleur, Arnold Smith, and The Rolling Coyotes will be performing”. Doors will open at 7:30PM and the music will begin at 8:00. There will be free food and, for a small donation, beverages will be available. “We ask for a $10 donation at the door”, said Nickerson, “and urge all local residents to help save a piece of our history and help a Shepherdstown family”.

SBPA’s goal is to save about ½ or 300 acres of the site of the Battle of Shepherdstown. This has proven difficult due to a proposed residential development of 152 houses on 122 acres in the core of the battlefield. Earlier this year, the West Virginia Supreme Court of Appeals granted the developer the right to proceed. SBPA’s attorney will file an appeal with the United States Supreme Court next month.

The Shepherdstown Battlefield Preservation Association Inc. (SBPA) is a 501(c) (3) organization dedicated to saving and preserving the site of the 1862 Battle of Shepherdstown. The battle was fought on September 19-20, 1862 involving approximately 9,000 troops and resulted in 677 casualties. The battle was fought over an area about one square mile located south of Packhorse Ford and east of Shepherdstown, WV. SBPA has preserved 84 acres by way of conservation easements granted by members who own property on the site.