The final block of the historic Piper Orchard is tentatively scheduled to be planted Saturday, 8 December 2007. In preparation for the planting, arrangements were made with Maryland Correctional Enterprises to erect the cages that protect the trees from deer. Six inmates and a team leader worked 182 hours over four days to install over 720 t-posts and their surrounding wire caging. The trees (176 apple trees) are to be planted with the help of a volunteer workforce – please join us if you can. 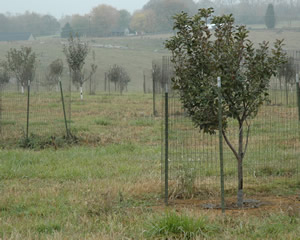 Unlike the historic varieties of trees that were chosen for the first two blocks of orchard, the new trees were chosen based on their ability to resist disease. The decision to not restrict the planting to just historic varieties was intended to make the orchard more productive and appealing for potential cooperators. Presently, all orchard management is done by NRM, but they hope to find a cooperator to take over in the near future.

If you are interested in helping plant the new trees please contact Michelle Carter at 301.432.2243, email michelle_carter (at) nps (dot) gov, or Tom Clemens by email antietam1862 (at) comcast (dot) net.