SHAF Donates $5,000 to Antietam National Battlefield for the Restoration of the Piper Farm Lane

NPS News Release, August 17, 2007 – This donation will allow the National Park Service to begin work on this restoration project several years ahead of schedule. Work will include repairing several areas which have suffered from severe erosion, installing erosion control devices, construction of a safe tread and installation of historically accurate fences. Upon completion the Piper Farm Lane will become a part of the expanding Antietam National Battlefield Trail System and will be open to the public. 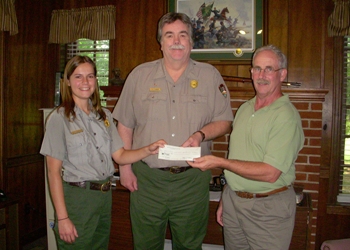 According to Superintendent Howard: “The Save Historic Antietam Foundation has been an active and dedicated partner to the National Park Service in protecting and preserving the Sharpsburg battlefield. They are to be commended for this gift to the people of the United States.”

descriptive essay on the beach

The board of Directors of SHAF feels that advancing the status of this trail will speed the restoration of the historic scene in the middle of the battlefield, and allow more visitor access to less-visited portions of the site. We are delighted to make this donation on behalf of our membership, knowing that they will be pleased to connect the various walking trails to allow a visitor to walk from North Woods to the Final Attack field and really see the terrain of the Antietam. We thank our donors for their generosity and dedication.